A New Look for Spring

Thanks to my daughter, my blog has a new look. Any help out there on centering the banner? 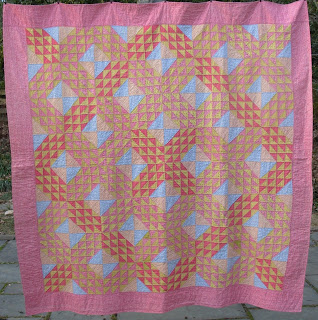 71 1/2" x 73"
This is the quilt in the banner photo. I bought it at the Sully Quilt Show several years ago. The information they gave me says – Double pink, blue and yellow calico “lady of the lake” Snyder Co., PA c. 1875-90 72”x78”. Actually, I think the pattern is “hovering hawks”.
I was inspired by Cheryl at Sew Many Quilts, So Little Time! to do some quilting for others this weekend. I pulled out something I started cutting for at a guild meeting last year. It was so simple; I completed a top last night and just need to put borders on another (and baste and quilt them, too, but finishing a top always gives me a sense of accomplishment!). 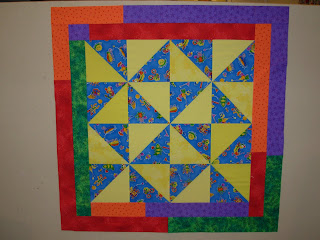 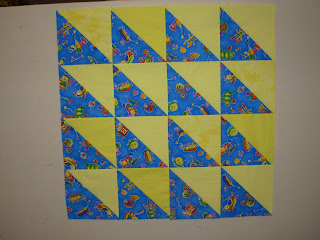 will be 37" when borders are added
To give people ideas for easy and cute patterns someone at the Springfield chapter gave out a set of instructions. The first step was to cut two 15” squares from both a light and a dark fabric. Layer a light and a dark, right sides together. Draw diagonal lines and stitch  ¼” on both sides of the line. Cut the square north/south, east/west, and on the diagonal lines. Press toward dark. Do again for the second pair and you have 16 half square triangles (hst). It is a good thing I took the time to square up the blocks to 7”. There are so many ways to set these hst. 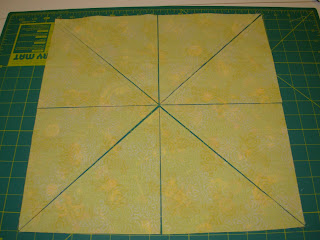 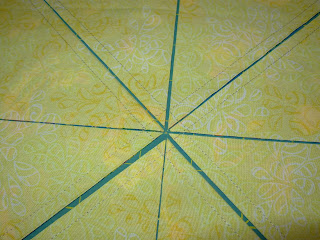 Good thing I made double the blocks. Janet at Quiltsalott made an appeal for making quilts for Japan. You can also find information from Bonnie at Quiltville. So one quilt will go to Japan and one will go to the neonatal intensive care unit at a local hospital. 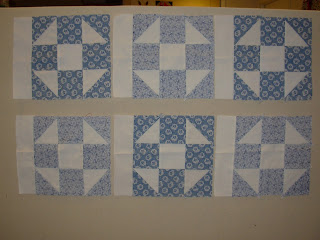 I might also do something with these blocks that I received years ago in a swap.
Japan holds a unique place in my heart. I have to admit, it isn’t the first place in the world I would want to visit, but all three of my children studied the language in high school. My daughter has gone a little further and is studying it in college along with graphic design. She has visited the country twice and we just found out a few weeks ago that she won a scholarship from the U.S. State Department to spend June and July at a university in Kyoto. So far we haven’t heard of any change in plans. Of course, our main concern is for the people in Japan who have been touched by this tragedy.
I’ve read two books about Japan and found each of them very entertaining. Both are about modern day travelers. Japanland: A Year in Search of Wa by Karin Muller and Dave Barry Does Japan by Dave Barry. 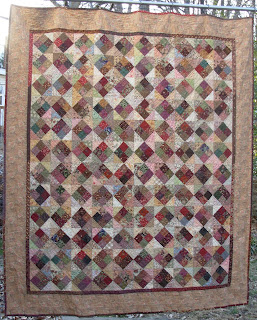 This is the quilt I used for my background the last few months. I made it using the Square in a Square ruler. It is twin size. I used some of the bonus triangles in my Northwinds quilt.
I think I’ve settled on a red and white quilt design. I have about 15” of wall space over the sliding glass doors in my kitchen. I had a tray, plates and crocheted pot holders displayed there. A couple of years ago I moved the tray and it left an empty space. I thought, oh, I’ll make a little quilt for that space and here we are – years later and the empty space is still there. It needs to be filled and a little red and white quilt would look just right. I’m thinking a pieced basket and border. Stay tuned. 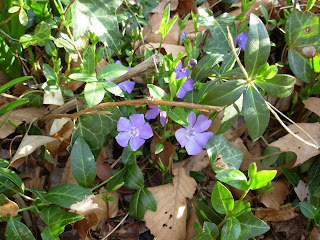