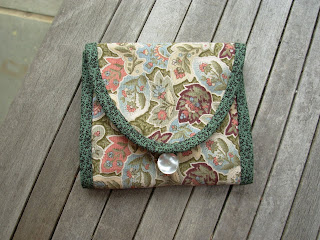 Here is my weekend project. It didn’t take all weekend, but it took longer than it should. I bought the booklet Pockets and Rollups for My Red Cape by Edyth C. O’Neill last year. I’m glad I didn’t pay full price for it because the pattern instructions were pretty sparse. Photos or drawings would have helped. It took some sewing and unsewing to finally figure out what I was supposed to do. To be fair, there is a lot of other informative text about textiles then and now and some nice photos in the book.
I feel really stupid! I just picked up the book to start giving the missing instructions (I was looking for the pattern piece letters) and FOUND DIAGRAMS on one of the pattern pages. Are you kidding! There was nothing in the text in the part titled "Instructions for making Pockets and Rollups" to refer to diagrams on the pattern page. Bother! Okay, so I'll just show you how I made the little clasp for the button. 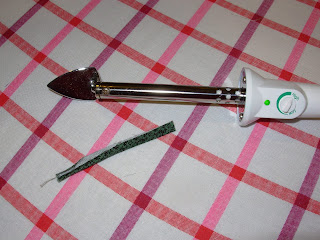 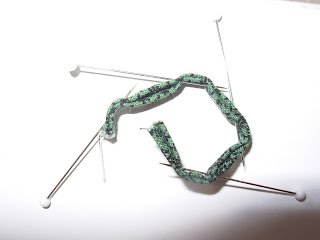 Pinned it - probably should have used my little applique pins, but they were upstairs. 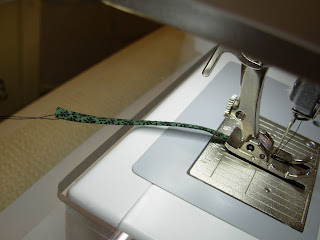 Then I topstitched it. I had to coax it along some by manually advancing it and then pulling the back thread because the feed dogs didn't have much to grab. 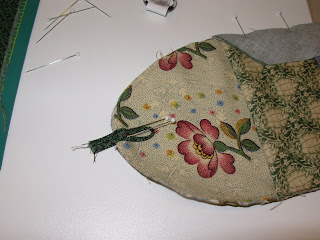 Trimmed it and attached it to the rollup before sewing on the binding. Then I trimmed it again.
The size of the loop was just big enough for the button to slip through. 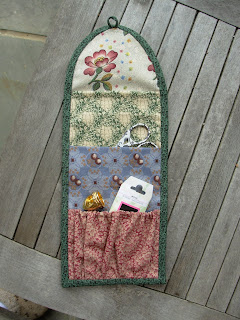 This was intended as a gift, but I think I'll have to make another one.  The top fabric looks a little odd. There is another flower below and to the right of the flower showing, but it is covered by the first pocket. I'm also not happy with the color of the binding and the blue pocket. Also, the gathered pocket is a little too loose. I guess I'll just have to keep it for myself ;o) 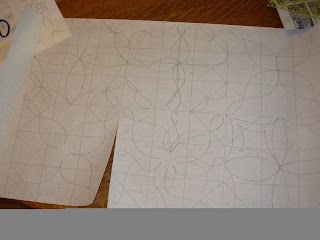 The Shoofly is in the machine. I’m just doing some simple free motion quilting. I liked the designs in Eva A. Larkin's book Free Motion Quilting Made Easy and auditioned some of them on butcher paper (drawing the block pattern first). 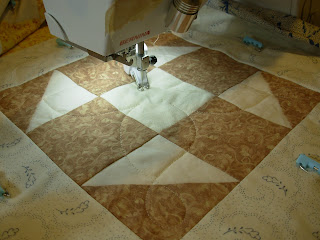 It seemed like most of them were either taking too much brain power to execute or too many stitched points coming together at the center so I ended up with this.
Posted by Maureen at 9:32 AM