It's been so long since I last posted I wonder if anyone will read this! I've been away from the computer for a while because I started up with carpal tunnel symptoms again. As I've mentioned, we are hoping to move next year and part of getting ready to do that is cleaning out. We knew we didn't want to move the huge, obsolete computer cabinet I was using so we got rid of it. I thought I could use a rickety little desk of my son's. Within just a short time of using it I started having pain in my wrists and up my arms. Thinking the desk was too high, I ordered a little white corner desk from overstocks.com hoping that would work. No improvement even after my DH adjusted the keyboard tray for me. I spent weeks just doing the bare minimum on the computer. One day I took the time to think about why this wasn't working. The height of the keyboard tray was the same as the old set up  - what could be the difference. I closed my eyes and thought about how I sat at the old cabinet and it dawned on me that I always rested my feet on the bottom trim. I found a box to rest my feet on while at my new desk and that seems to have done the trick! I still feel a twinge now and again and am still trying to limit my computer time and wearing wrist braces at night and part of the day. Less computer time did allow me extra time to do some cleaning out of closets and drawers. I thought I'd been pretty good about doing that all along but when I heard movers charge by the pound it changed how I thought about my stuff. Every couple of weeks I've been putting out boxes and bags of stuff for the charities who pick up your donations at the door. Makes it very convenient. I also cleaned out my sewing room and had the back of my Forester full of things to take to my guild's Stash and Dash. Have you heard of that? Everyone brings quilting supplies and fabric they don't want anymore, the guild sells bags and you have a set amount of time to fill them. Unfortunately, our meeting was cancelled due to snow (love the snow, not the cancellation). I know of another guild who has a free table at their first meeting of the month so I may have to do that instead.

My, my how I've gone on! I have spent some time at the sewing machine and was able to put together this churn dash top. These are the blocks Janet O and I swapped. I made quite a few extra. It grew even larger than I'd initially planned when I decided on this border setting. 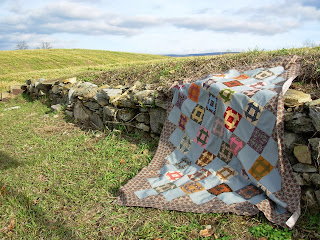 Last Saturday we took a drive out to Berryville Virginia to see their Christmas parade. I took the opportunity to get quilt photos in an outdoor setting. 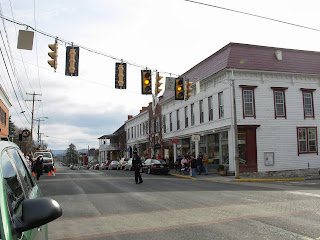 This policeman directing traffic before the parade began reminded me of the policeman in the Frosty the Snowman TV show. 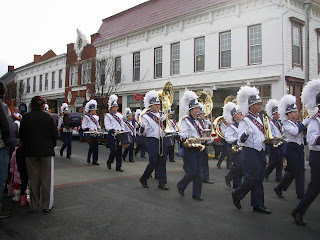 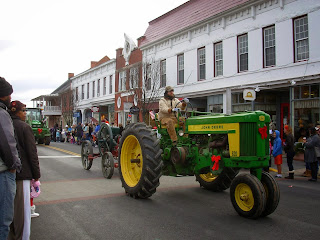 Berryville is in Clarke County in the northern part of the Shenandoah Valley. It is still very agricultural even though it's only 1 1/2 hours drive from Washington DC. 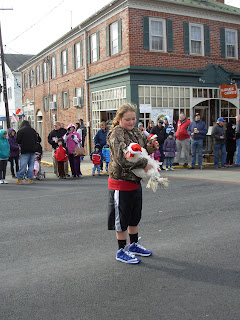 this girl is carrying a turkey wearing a Santa hat 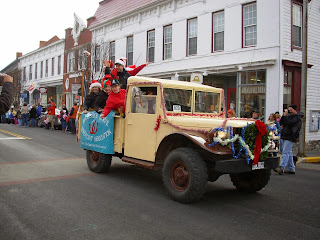 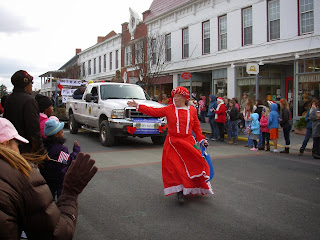 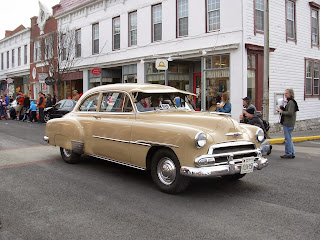 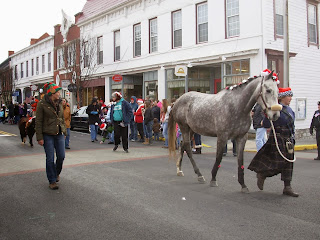 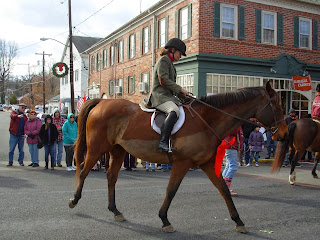 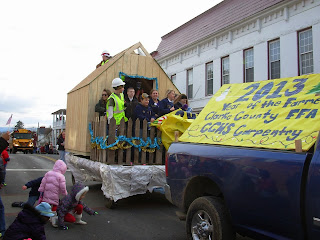 The people on the floats and in the parade vehicles were throwing candy. I guess that's standard practice at parades nowadays.

I also finished up the quilt for my great niece Halle who was born a few months ago. This took forever to quilt - just a meander pattern - because I was having trouble with breaking threads and thread tension. I usually use Aurifil thread and was using a varigated pink Mettler I've had forever. I went to a local quilt shop to get some pink Aurifil and the owner told me it was probably time to get my machine cleaned. So I did. My sewing machine repairman - at a different LQS - said if the cleaning and adjusting didn't work to try a 90/14 needle or bring the BSR back in for a new spring. I was still having problems so as a last ditch effort I tried the Auriful thread and breezed through the last bit of quilting. Why don't I listen to myself! Oh, well. It was time to get the machine cleaned anyway but wished I'd tried the new thread at the very beginning. That Mettler thread went into the trash! 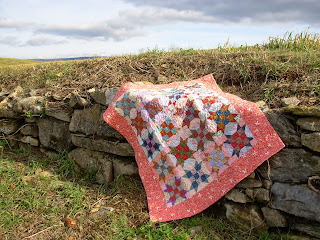 I need to get this mailed off. Halle will need it in the cold temperatures of Minnesota. 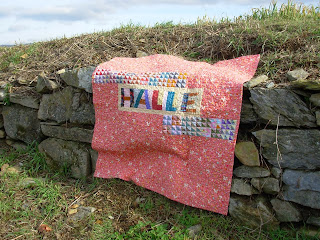 I used the corners I cut off when making the star points to add a little more interest to the back of the quilt.

Don't know if I will post again this year. Hope everyone has a safe and jolly holiday season!
Posted by Maureen at 11:16 AM 18 comments:

The Warmth of Other Suns by Isabel Wilkerson